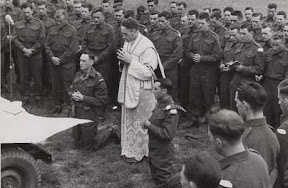 Moving on to Brighton on the English Channel in the South, the company replaced a British front line guard duty for a few weeks.  The Colonel in charge requested Bob Paton, Protestant Chaplain, to be “Duty Officer” on night.

The Colonel’s office was connected to the Sea Coast by telephone.  Just before dawn he received a message.  “There ships were invading.”  He awoke all of 2nd Division, Eighteen thousand men to “Stand - By.”

It was daylight before they discovered the ships were three clouds on the horizon.  Was he embarrassed!

Next night Rev Dalton slept by the phone.  Two P.M. - Voice on the phone says: “Visibility less than two miles.”  The Padre’s reply: “My bed less than two feet.”  And he crawled back out of the bitter, damp cold.  There was not enough coal, the miners were in the army.

Father often said Mass in a vacant Brewery.  At Rye he said Mass in a Convent Chapel.  After Mass a big Irish Mother Superior called him out of the Sanctuary.  “That’s enough prayers.  The breakfast eggs were laid yesterday.” (As eggs were seldom in their rations, here words were a blessing.)